Good evening!
I had thought I would be able to get back to you before the kids got home but I wasn't in any way as productive after lunch as I had been before lunch but I managed to make three new rolls on my chalenge list and complete three layouts.

First I rolled #59 Make a list. I had no idea what to make and I almost made a new roll but then I thought about lists maybe being just a list of things happened, maybe a list of things and maybe a lit of wishes. And then it went totally off topic and I ended up choosing the photos from my son's birthday gift opening. There were nine small photos and I spent alot of time to try and get them in different arrangements on my page and I guess that was when time started to fly away from me. I grabbed some scrap papers from my stash and made a border and some journaling and when I was about to write a title I got back to the thought of making a list and I kind of realized that I had gotten lost. But in the process I made a layout that has been waiting for me for some time now and I'm so pleased with that! This is what it looks like: 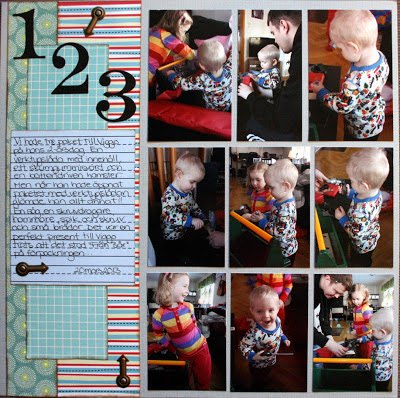 My second roll was #41 Washi tape. I had used alot of washi already today and I was a bit reluctant to making yet another rainbow eventhough I just love them and I really bought my washi tapes just to be able to make rainbows, but I decided on trying something I saw online a couple of days ago, using punches on washi. I picked out a couple of photos of my son in the bath and punched out circles from the journaling paper from last layout which was lying on my desk. Then I put washi on white paper and punched out circles out of that and got circles covered with washi, really cool! I placed the circles around the photos, some on foam tape and then I made droplets all around with Glossy Accent. 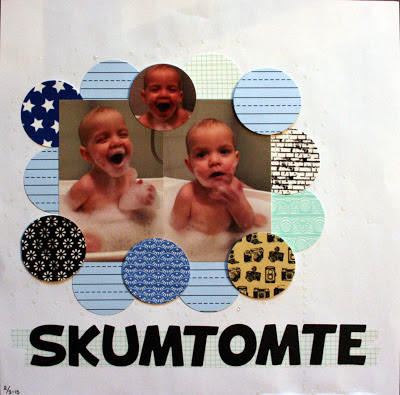 My last roll for the day was #58 Coldness, winter, ice, snow. No problem to find photos for that after this winter! We've had so much snow it's been crazy! I choose three from early December when the snow piles were still small and shovelling still felt like a novelty.

I have a habit of ordering three photos of all occasions and I get stuck in this type of layout when I put the photos side by side on a row over the page. I need to have that in mind next time I order copies.

First I thought of going back to my Christmas/winter papers and make a traditionally colored winter layout but then I got a bit crazy and saw the color of our neighbours orange house and thought: Hey orange is a cool color! I choose a couple of strips of papers from my pile and made a background on a very old patterned paper, I think from Daisy D's. 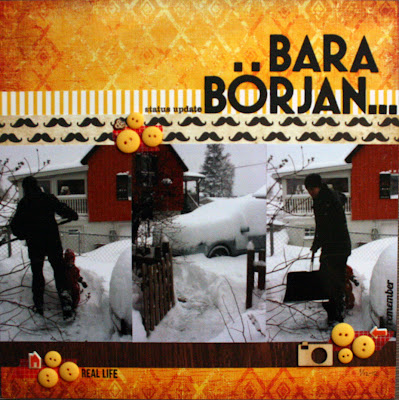 I made three clusters on washi with buttons and puffy stickers and I added some stamped text. The title is QK Chicago and it says "Only the beginning..."

That's all for today folks! Now I'll place myself in the sofa with some "Big Bang Theory" and try to figure out if I'm fit for work tomorrow.

Email ThisBlogThis!Share to TwitterShare to FacebookShare to Pinterest
Labels: Layout