Good Friday morning!
Today I'm sharing four more layouts I made during my vacation. I'm happy I was so productive and creative during my three weeks off because now I'm in a total stand still and even though I have "only" ten layouts left to reach my shop stop goal I have no mojo whatsoever to get scrapping in the evenings when the kids have gone to bed. I hope it will change soon.

First I have a couple of photos from 2010. It is my daughter and my mum's cat getting acquainted with eachother. I must say I'm very fond of the small doilies I bought with my latest embellishment haul! They are really pretty and they were so inexpensive! I'll try and see if I can find more when I do my next shopping. On this layout I tried one of Nicole Jones' (nicolejones911 on You Tube) ideas and used small "knots" of twine in my embellishment clusters. I think it worked out just great and I will use it soon again. I glued it down with my Strong & Precise liquid glue. 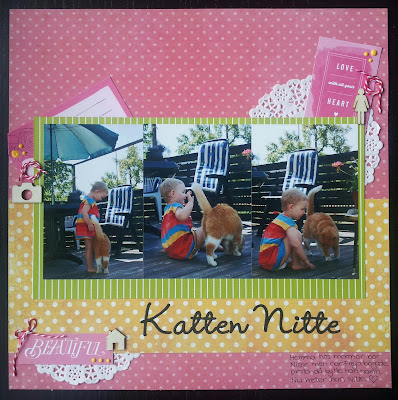 These photos are from 2010 as well and the goofball in the pool is my daughter. I used the year as my title together with the small lable infront that says "childhood SMILE summer of". 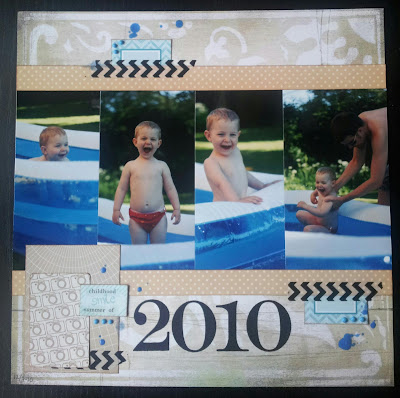 In March when my daughter turned 5 years old we bought her a bike. We wanted it to be a bike that her brother can have after her so I didn't feel like buying a pink one. We bought a black bike which had some boyish kind of decorations, stripes and cool text. I managed to peel off those since they were some sort of stickers. Then I replaced them with lots of lovely hot pink butterflies. So you can say I actually scrapbooked her bike :) I even had some of the butterflies left for the album page. Isn't that just a happy coincidence?! LOL! It was fun to finally get to use the wood veneer bike. I have lots of new photos with my daughter practising her biking so I will have no problem using them in the future. 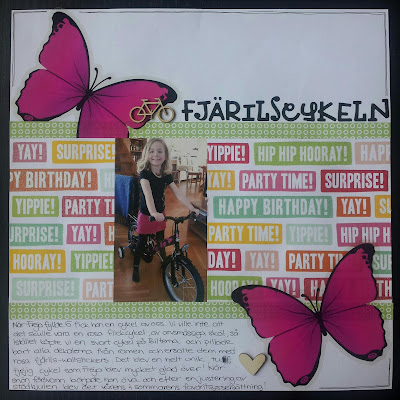 While I had that fun birthday paper on my desk I decided to use some with other birthday photos. These two layouts will not go beside eachother in the album, they are several weeks apart. When I see it now I have decided to add some kind of titel on the lower green strip of paper, I think that will ground the whole thing. The small bag on the left holds the wto candles that my son had on his birthday cup cake in the photos. It is a small zip lock bag and I folded a piece of that green paper over the top and stapled it in place to hide the "zipper". 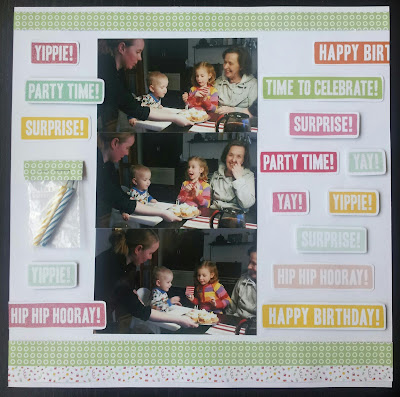 The other day I got a nice coupon offer from the company I order paper copies from and it will expire on Wednesday so I plan to get my vacation photos in order and order a bunch of paper copies during the weekend. That will be alot of work but will result in sooo much fun scrapbooking over the next couple of months!
I'm trying to keep myself updated with the CHA Summer releases and I have found a couple of collections that I will look for. Unfortunately it takes agas before stuff comes to Sweden. Perhaps I'll have to treat myself to a box of goodies from Two Peas later this year.
Have a nice day and a lovely weekend!
//Åsa
Posted by Mirabyll at 12:54 PM